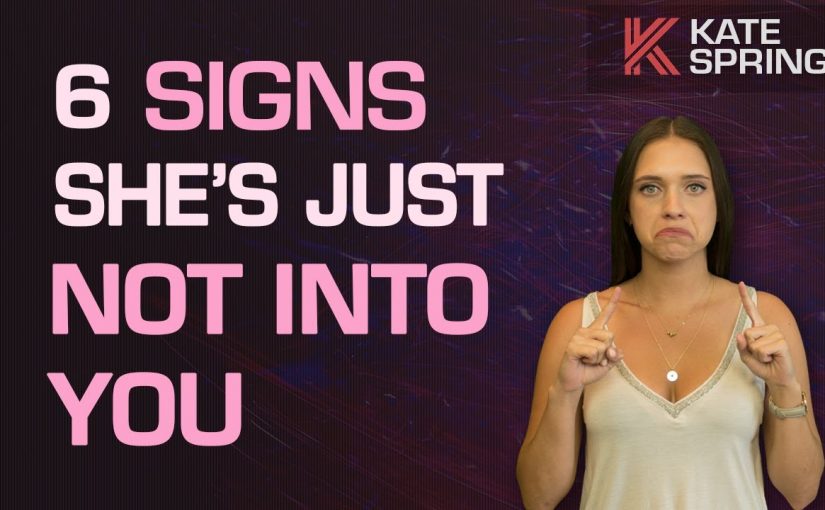 Have you ever been in a situation where you cannot tell for the life of you whether or not the woman you have spent so much money and time on is interested in you??? I’m Kate Spring, and I’m here to share 6 signs that she’s not into you.

Too many people are passive aggressive and have a serious inability to face their problems head on. When I was young, I would have preferred to write a Chemistry exam than to talk openly about my feelings.

And, unfortunately, too many women are still like this today. It’s not malicious. It’s more of an act of self-preservation because we genuinely don’t want to hurt people’s feelings, and we surely do not want to deal with the guilt that follows rejecting someone. So I’m going to share 6 ways you can tell she’s not into you.

I’d say the first sign that a woman is not interested in you is if she isn’t responding to your texts. This is the MOST passive aggressive way to let someone know you’re not interested. Ghosting is such a shitty habit of our generation

How have we evolved to such a place where this is now considered normal? If you’re not familiar with ghosting, it is the act of just not responding to someone. Urban Dictionary defines it as “fading, or quietly disappearing from someone’s life and cutting off all communication.” Horrendous. And If you yourself do this, don’t. Have more respect for people and their time. Ok, rant over.

Another way to tell if she isn’t interested in you, which you can tell through text messages, is if her answers are short. If her texting is like those one-word fridge magnet poems where you just piece one word together after another. And getting a full sentence out of her takes longer than reading the Harry Potter series in its entirety, then she is not interested in you, and you would find your time better spent finding someone else.

Another way to tell that she isn’t into you, which is even worse than ghosting, is if she makes out with someone else. This happens in dating today, and it is a very key thing to look for. As well, it doesn’t matter how drunk she claims she was. She is not thinking about you or your feelings; therefore, move on. Plain and simple.

Involved in a go-nowhere relationship, having drank himself into indifference, I had this pulled on me once. The guy I was seeing started having a dance floor make out session. My response was brief: “See you later, see you never.” Needless to say, I felt like shit and had to have a serious sit down talk with myself about the type of person I wanted to be with.

It started with understanding that I had missed all of the signs and had refused to let my situation speak until I needed to hear it as a scream! I know that they say that love is blind, but, in the early stages, before your heart is invested, make sure that she is into you as much as you are into her. And that means reading the signs.
If you want to avoid situations like I just mentioned, head over to katespring.com/free and grab a free copy of my attraction building handbook, which will help you get any girl you want and keep her interested. That’s katespring.com/free. And you will find the link in the details below.

The third sign that she isn’t into you is if she hasn’t introduced you to any of her friends. This might be because she’s embarrassed of you or sees no future with you. Or her friends just suck or maybe she just sucks? Regardless, move one. If someone doesn’t want to show you off, then I think we are entering the friend zone, or maybe she is just not into you.

The fourth sign is a lack of eye contact. If she does not look you in the eye, you have a serious problem. Eye contact has to do with our level of comfort in a situation. If we lack eye contact, or it is sporadic, then that is usually a sign that someone is uncomfortable, whereas if someone has strong eye contact, then that usually means that they are comfortable. And, plus, if a woman likes you, she will look at you and probably won’t be able to take her eyes off of you.

Do you guys have any questions yet? No, well when you do, don’t forget to leave them in the comments below.
Ok, the fifth sign that tells you that you should abort the mission is if she puts no effort into her looks. Most of the time, women will dress up for any situation where the two of you are hanging out. It is a way for her to show you that she is interested in you without having to say it. So if she is putting little to no effort in, I think you have entered the friend zone, my friend.